News from the board

Life is full of unexpected surprises. In February the whole board was in Kisumu to celebrate our 10th anniversary after which we all agreed: what we needed was a volunteer who could tackle all the appliances that the children used, especially the wheelchairs. A nice vlog of board member Evelien asking for volunteers resulted in a reaction on social media:

Hello Evelien, how are you? It has been ages!  I am looking for an opportunity to make myself useful as a volunteer for 2 or 3 weeks. I was thinking of Amara Foundation. Is there a project in Kisumu at the end of February and the end of May where help can come in handy? Would love to hear from you.

If you want to read the whole travel report click here.

Until deep in March it has been very dry so the maize didn’t grow well. When our volunteer Lars was in Kisumu in March and we heard from him that it rained now and again we hoped that the vegetables in St. Clare’s garden would grow. Unfortunately we were told that there had been terrible floods in the garden and the whole crop was destroyed. Bad news from sister Lucy who always talks so proudly about her vegetable garden because it enables her to give the children healthy food. Of course we all hope the next harvest will be abundant.

St. Anthony is a school where a number of our multiple-handicapped children are given care and education. During our visit in February Moses appeared to be ready for school. Due to his physical problems not everyone can look after him. His mother can: she was born to be a carer for handicapped children. In the hospital she always looks after all children, mothers and therapists. She sees what must be done and acts upon it. In February the idea came up to let both mother and son go to St. Anthony: Moses as a student, his mother to look after him. In March there was a pilot which went quite well. We are happy about it. Both Moses and his mother have moved to St. Anthony.

For a few years now Francis has had his Coca Cola kiosk where he sells French fries, soft drinks and some candy. On May 8 his eldest child, his son Marvel, was 3 years old.  On May 25 we i from his wife Sharon the happy news that a daughter had been born, Kenzie Kyler. However, on June 2 we were told that Marvel had serious burns. We do not know what exactly happened and it is not important.  What is important is that Marvel will get treatment and we have immediately decided to support them. The first few days he was in hospital. Since June 12 he has been home where he gets further treatment on a daily basis. A therapist comes to the house to de exercises with him, especially his hand. Hygiene is very important as he has also burnt his mouth and needs (more expensive) special food. We support Marvel where we can. On June 20 Sharon told us that she was very happy: Kenzie is fine and Marvel is recovering. They are grateful for all the support they get.

Mia de Smit-van Rosmalen, friend of board member Maria Vermeer passed away on March 23 last. She had a soft spot for Amara Foundation and has asked for a donation during her commemoration.

On April 10th a wonderful benefit dinner took place for Amara Foundation. Third-year students of the Heerbeeck International College were allowed to organise events of their own choice. A number of these students have chosen to organise an event for a charity.

In April customers of the EMTE have donated their receipts on behalf of Amara Foundation.

Many inhabitants of Gestel have offered all kinds of things for sale. Lisanne has worked hard to sell everything.

Monday May 21 lots of people got on their bikes for a sponsored 50 km. cycling tour organised for a maximum of 15 small-scale third world projects. Amara Foundation was one of the chosen charities.

The weather was wonderful and a lot of money was raised; thank you, organisation of Trap-in and all participants.

In the Protestant Church the theme in May was again Amara Foundation. Every Sunday an aspect of our projects was mentioned. Maria has made a speech and we have given our presentations.

From Kisumu we have brought back beautiful new products like small coloured sisal angels, roughly crafted soapstone (small) animals and (tea) dishes, oven cloths and new wooden spoons with text. The schoolyear is ending and of course you want to thank your child’s teacher for all the care he/she has given. A nice and original present for a teacher who is as strong as an elephant, who is a star or an angel, or someone who loves tea. We also have various nice trinkets. See our facebook page or go to our website to have a look.

News from the board

KRO action. Thanks to a good friend of Amara we have a chance to receive a large amount from the KRO charity action. We still need quite a lot of votes. So give your vote through this link and do not forget to confirm!

At the end of September there will be a carport sale in St. Michielsgestel. We still need people to man the stalls. Lisanne will be there too and the proceeds will go to our projects.

September 30 Evelien will be at the stall in the marketplace in Geldrop to sell all kinds of things.

November 14 Evelien will give a Pecha Kucha presentation about Amara Foundation.

Thursday June 7 we received the sad news that Maria van Bergen had passed away at the age of 61. In 2012 she was in Kisumu for three months and she was very much involved with everyone. Our ‘Amara family’ always asked about Maria who was also part of this family. It was Maria’s wish to make a donation to Amara foundation. A lovely gesture. Carmen, her niece and board member has already written beautifully about Maria on our website.

We can proudly report on our website that we have also received the CBF recognition in 2018. CBF supervises Dutch charities. More than 500 charities have to meet strict quality demands. Donors know it is safe to support these Recognised Charities. The CBF also investigates reported possible abuses and shares this knowledge. In this way we also contribute to professional and transparent charities.

Thanks to our volunteer Jan van Bragt and accountant’s office Meulenbroek for certification the 2017 annual report is on our website in time.

Thank you all on behalf of the board

And everyone from Kisumu!

Here you can unsubscribe from his newsletter. 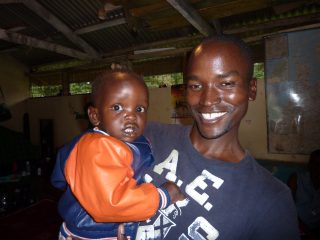